The Baker Gets His Man

I am thrilled to tell you all that my newest release The Baker Gets His Man for Evernight Publishing's Romance on the Go line is now up and available!  And don't miss your chance to win a free copy!  Details below! 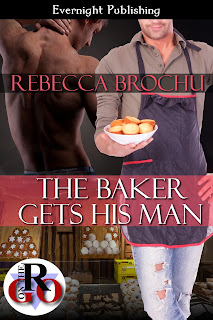 The Baker Gets His Man

Romance on the Go

Jacob Stine, one of the owners of the town’s bakery, has wanted Race Carroway since the moment they first met.  Despite the obvious tension between them, he’d always assumed that the hunky mechanic would never be interested in him.  Jacob had resigned himself to admiring Race from a distance until the day he’s forced to call him for help.

When the encounter turns steamy and then abruptly ends, Jacob is torn between hurt and confusion.  He has to make the decision between finally moving on and trusting Race with one more chance.  Will the baker have what it takes to get his man?

He was aware of the way Race’s long fingers wrapped around the steering wheel and how the muscles in his arm bunched when he shifted gears.  The cab of the truck smelt like sweat and grease and a hint of the spicy cologne Race wore.  Normally the combination would smell unpleasant, but it only reminded Jacob of days spent staring out the bakery window and watching as Race pulled himself, sweaty and disheveled, from underneath whatever vehicle he was working on.  Jacob had always imagined what it would be like to make his way into the garage at night when Race was working late, to find him laid out on the creeper wrist deep in the undercarriage of some car or truck.  To kneel on the cold concrete floor, unzip the fly of Race’s worn jeans, pull his cock out and swallow it down.

Jacob had spent more than one night, alone in his bed, hand fisted around his own cock as he imagined the choked off sounds of surprise Race would make as he sucked him off nice and slow.  He tried to shake the thought off, tried not to get caught up in the fantasy when Race was only inches away from him, but it proved harder to do than he’d ever imagined.

By the time Jacob saw his driveway in the distance he was half hard and sweating lightly, desperate to get out of the truck before he did something he’d regret.  Something like reach for the tab of Race’s jeans even though he was almost certain that Race wouldn’t welcome the gesture.  He was already reaching for his seatbelt as Race pulled into his driveway, but Race clamped a hand down on his shoulder and stopped him from leaping out of the truck.

How to enter to win your free copy!!


Posted by Rebecca Brochu at 11:24 PM No comments:

Email ThisBlogThis!Share to TwitterShare to FacebookShare to Pinterest
Labels: erotica, Evernight Publishing, gay, Giveways, m/m, Rebecca Brochu, Romance on the Go, The Baker Gets His Man

Oh have I got a treat for you guys!!  I'm pleased to say that I have the lovely Doris O'Connor on the blog today celebrating her newest release. 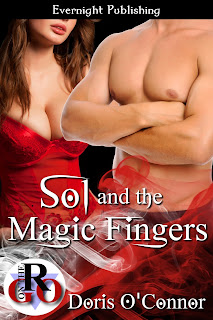 Now I'm lucky enough to have the lady herself here to talk about this sizzling new piece!

Thanks so much for having me here today to share a little about my new release, Sol and the Magic Fingers.
This story was a dream to write, because it literally wrote itself J I've always been fascinated by Genies. Aladdin was one of my favourite stories as a child. So, when a reader left a comment on my blog wishing for a magical e-reader, I immediately thought, "Oohh, now there's an idea."
I was busy with other things, until New Year's Eve, when I was standing at my kitchen sink, doing the washing up, and … Poof … in true Genie style there was Sol in my head, telling me the entire first chapter.
Now, I love it when that happens, but it was New Year's Eve and I had a poorly toddler to boot. However, I know when resistance is futile, and like the dutiful author I am, I sat down and took dictation. Four am the next morning saw me type The End. J
So, there you have it. The magical journey of Sol, lol. I hope you enjoy reading his story as much as I enjoyed writing it…

Blurb:
Breaking your e-reader at the end of a long and trying day is enough to send any woman over the edge. Karen's one treat are her naughty stories. Desperate times call for desperate measures.
Saucy stories in the old library? It doesn't seem likely, but when Karen is sent home with an odd looking reading device magic happens at the touch of her fingers. Is the drop dead gorgeous man she encounters real or just a flight of her imagination?
Caught in a weekend of sexual delight, will she lose her heart, as well as her inhibitions? And is there any future for the two of them?

Excerpt:
She jumped up, rinsed off her plate in the sink, and grabbing a fresh cup of coffee on the way, headed for the sanctuary of her bedroom. Here she liked to immerse herself in her stories, to forget about her worries, and let herself be transported into another world of drop dead gorgeous men, who actually knew how to pleasure a woman, and didn't leave their dirty socks on your bedroom floor. She giggled at the thought and ran her hands over the e-reader. Just like before it seemed to come to life in her hands. It shimmered and grew, and as if by magic the story she'd been reading appeared on the screen.  Well, Mr. Jones had said it was in there. She found her place and started reading.
Two hours later she dropped the reader out of her clammy hands and drew a ragged breath into her lungs. Wow, that had been an intense read. The story was hot, but somehow, this time round it had felt as though she had been the heroine in the book, so engrossed had she been in the scenes unfolding in her mind. Beads of perspiration covered her body, and her breasts felt heavy and so sensitive that the slightest touch of her blouse against her hard nipples sent darts of stinging awareness between her thighs. Her underwear was soaked through with the evidence of her arousal, and a mere brush of her fingers over the engorged nub at the top of her slit was all it took for her to tumble into a breathtaking orgasm.
When she had her breathing back under control, she smiled, as her fingertips touched the reader. It brightened and vibrated slightly, and Karen couldn't stop herself from murmuring her wish.
"If only you could magic me a real life man like the ones in your stories." The reader grew hot, and Karen yelped as it burned her fingertips. She blew on them and frowned, but the reader was once again back to normal. Still that odd looking design, but not glowing, vibrating, or otherwise, and—she touched it gingerly—not hot. Karen shook her head at her fanciful imaginings and headed for the shower.
That's what she needed, a nice long, hot shower to chase away the cobwebs and a chance to try out her new waterproof dildo. She sniggered as she turned on the shower and eyed the huge phallus shaped object. She would see…
She switched on the shower and stepped under the heavy stream. The power shower had been the major selling point when Karen had bought her apartment. Where other women soaked in the bath, she lingered in the shower. Nothing like letting the jets of hot water soothe cramping muscles and drain the stresses of the day down the swirling plughole. She closed her eyes and let her mind wander. She wasn't really standing in the shower—no she was on a tropical island under a cascading waterfall, waiting for her lover to appear. She smiled and cupped her breasts, imagining it was another set of hands massaging the heavy globes. She leaned back against the tiles to steady herself, only in her imagination it was her lover's hard muscled chest. Two strong arms circled her, and her heart did a silly little flop, as teeth grazed her ear.
"I've got you. Just let yourself feel." The deeply seductive, slightly accented voice dripped over her senses, like hot, molten chocolate, and the unmistakable edge of command caused a delicious flutter of excitement deep inside her core. He trailed his large, slightly calloused hands along her arms and pulled them up high above her head. Something wrapped around her wrists and another tug brought her up on her tiptoes. She swayed until his hard arm ‘round her waist grounded her against him. A hair-roughened thigh slipped between her legs, creating delicious friction against her core, and a rush of her juices coated her nether lips.
"Who are you?" She had to ask, even if it meant spoiling the magic, for the hard cock pressing into her ass cheeks left her in no doubt that she was not on her own. Either she was fast asleep, having the most erotic dream yet, or she had indeed been joined in the shower by an unknown man, whose clean and slightly spicy musk permeated her consciousness, and pitched her arousal higher still. Like the strongest aphrodisiac, his scent surrounded her, strange and familiar all at once, and the frisson of fear the absurdity of the situation brought with it, just increased the intensity of her feelings.
"I'm Sol, and I'm here to make your dreams come true. Will you let me?"

Author Bio:
Glutton for punishment would be a good description for Doris... at least that's what she hears on an almost daily basis when people find out that she has a brood of nine children, ranging from adult to toddler and lives happily in a far too small house, cluttered with children, pets, dust bunnies, and one very understanding and supportive husband. Domestic goddess she is not.
There is always something better to do after all, like working on the latest manuscript and trying not to scare the locals even more than usual by talking out loud to the voices in her head. Her characters tend to be pretty insistent to get their stories told, and you will find Doris burning the midnight oil on a regular basis. Only time to get any peace and quiet and besides, sleep is for wimps.
She likes to spin sensual, sassy, and sexy tales involving alpha heroes to die for, and heroines who give as good as they get. From contemporary to paranormal, BDSM to F/F, and Ménage, haunting love stories are guaranteed.
Find Doris on the web here:
Website  Blog Twitter Facebook Pinterest
Posted by Rebecca Brochu at 12:00 AM No comments: