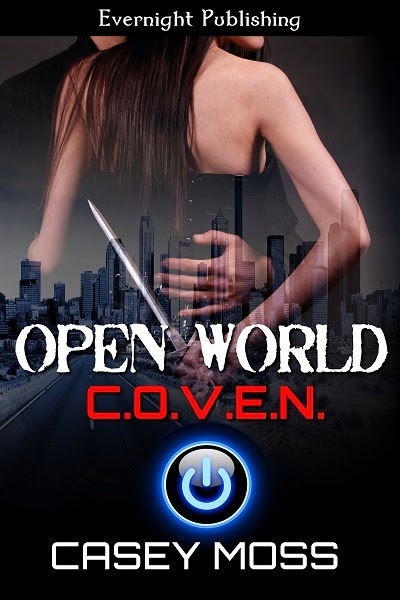 Due to release in May 2014 is Open World – C.O.V.E.N. by Casey Moss. The world of C.O.V.E.N. (Clans of Vegas – Endless Night) first appeared in Evernight Publishing’s anthology Keyboards & Kink (available here: http://www.evernightpublishing.com/keyboards-and-kink/ & at other fine e-tailers) in Casey’s story, AFK.
In AFK, we saw a peek into I-D-8 Entertainment’s in-production MMORPG: Clans of Vegas – Endless Night, also known as C.O.V.E.N. when Beth and another gamer got sucked into the game for real.
Now, in Open World, the employees have joined together for a LAN party to test the game. For definitions on the computer gaming term open world, check out http://www.techopedia.com/definition/3952/sandbox-gaming). Here’s a look into the story…

~ Blurb ~
The world has broken out in wars. Las Vegas has been ravaged by chemical warfare and is now home to several clans and creatures.
Welcome to I-D-8 Entertainment’s newest game: Clans of Vegas—Endless Night.
Friends and family have gathered for a crunch time playtest of C.O.V.E.N.. When a horrible thunderstorm hits, everyone’s sucked into the game for real. In the MMORPG, Hope Collins is kidnapped by Buzz and forced to submit to his whims. Her boyfriend, Alden, has to delay his quest of defeating a clan’s prince to save her, but time and circumstance don’t seem to be on his side. Faith Collins is bombarded by strange dreams brought on by Buzz. Her boyfriend, Tavis, learns to dream walk, but can he help break the spell she’s under and save her before she’s lost to him?
C.O.V.E.N. is more than just a game. It’s a whole other world.

For unedited peeks into the C.O.V.E.N. series, visit: http://caseymossbooks.blogspot.com/search/label/Open%20World
Stay tuned to Casey’s links below for the release date to be announced!

~ Bio ~
Casey Moss delves into the darker aspects of life in her writing, sometimes basing the stories on reality, sometimes on myth. No matter the path, her stories will take you on a journey from the light-hearted paranormal to dark things unspeakable. What waits around the corner? Come explore…

Posted by Rebecca Brochu at 10:44 PM No comments: