It's Time To Meet The Heir 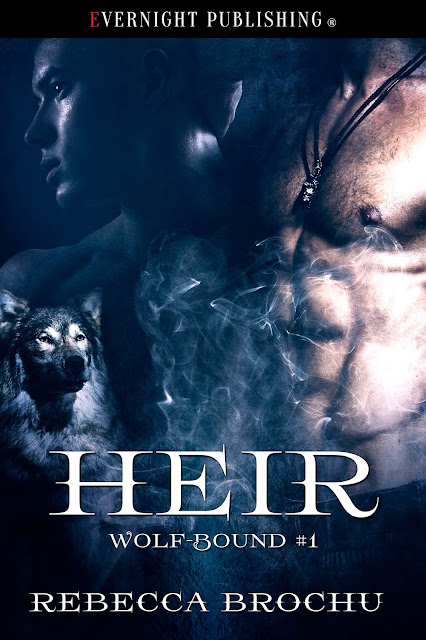 In a world where magic makes might Cyril Arlen is the fourth son of the Matriarch of House Arlen, a powerful clan of witch-born.  Uninterested in politics or the pressures associated with his House, Cyril is content to leave it all behind to live a quiet and peaceful life on his own.

Unfortunately not everyone agrees with that choice.

After a decade of peace Cyril is unexpectedly named Heritor to his mother’s position and shoved back into the spotlight against his will.

Now, forced to deal with a power hungry half-brother and the pressures of one day ruling his House, Cyril’s only comfort is Alpha Sinclair Ferus.  Sinclair is duty bound to protect him and happens to be
the same man who has fascinated Cyril since he was a child.

Despite his reluctance to accept his new position Cyril finds that having Sinclair around might just make it all worthwhile.

For one tense, almost too long moment, Sinclair was rigid against him, the shoulder beneath his hand as hard as marble. Just as Cyril was prepared to pull back, to stammer an apology and find somewhere to hide until his hurt and humiliation had faded, Sinclair moved.

Alpha in all the ways that mattered, Sinclair took control of the kiss with a barely suppressed snarl. His mouth went from passive to aggressive as his arms came up, one large hand cupped the back of Cyril’s neck firmly while the other arm wrapped itself around his waist. Cyril barely had time to blink before he was tugged even closer to the heat of Sinclair’s frame and desire threatened to completely white out his thoughts.

There was a low rumbling growl building in Sinclair’s chest, Cyril could feel it with as close as they were pressed together. Caught up in his lust Cyril couldn’t help but try and press even closer to him. The arm around his waist was a band of steel that clutched him tightly as Sinclair’s tongue swept into his mouth to tangle with his own. Sinclair tasted of mint and hints of spice, chai like the tea he drank in the afternoons.

The arm around his waist moved then. Sinclair’s hand trailed down across his waist and his lower back only to pause long enough to squeeze his ass for a brief moment. Then, with a flex of muscle, Cyril found himself hoisted in the air so that he could wrap his legs around Sinclair’s tapered waist. He groaned at the sensations the new position invoked, at the way Sinclair’s hips fit so nicely between his thighs, even as Sinclair shifted them until Cyril felt a wall at his back.

Sinclair broke the kiss a few seconds later only to nip sharply at Cyril’s bottom lip and duck down so he could mouth wetly at the curve of his throat. Cyril didn’t hesitate to tip his head back as far as he could against the wall behind him, purposefully baring his throat.

Sinclair made a rough growling noise and then his mouth seemed to be everywhere. He sucked harshly at Cyril’s pulse point, ran his tongue across the throbbing vein, nipped at the sensitive skin until Cyril knew he’d have marks. He also knew what the willing and open baring of a throat meant to a wolf.

Posted by Rebecca Brochu at 10:42 PM No comments: